Today we have selected 20 Mehndi Tattoo Designs that woman can try on events of 2019 so scroll down and check all the designs.

The role of mehndi is essential for every South Asian bride. Mehndi is available in so many different patterns and you can use your own creativity too.

Mehndi artwork designs are inspired by animal, flowers and some mixed patterns that you usually see in daily life.

Design patterns may vary based on occasions and season like for weddings woman likes to have unique and more stylish patterns whereas on social gatherings simple patterns are used.

Mehndi designs are not just only popular in South Asia they are now recognized around the world more commonly known as Mehndi tattoos.

Mehndi tattoo designs are similar to Indian or Pakistani mehndi designs or even Arabic mehndi designs different is in some art prints because tattoos are for social gatherings and usual daily lifestyle which you can opt for daily.

Mehndi tattoo designs are made from semi-permanent or permanent ink and most tattoo artists try to replicate the beauty of mehndi.

Here are some of the easiest mehndi tattoo art designs which you can have on any occasion you like. 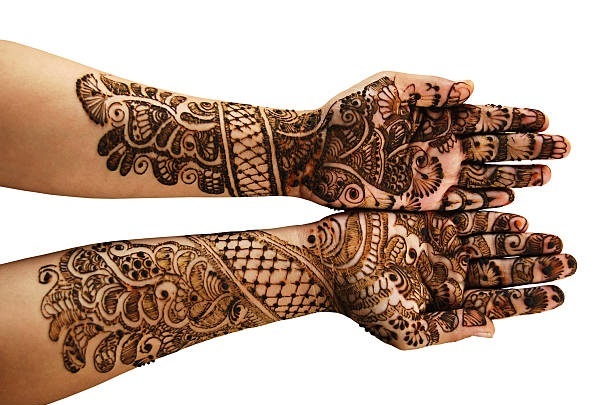 This is one of the best examples of eastern mehndi design, especially from the Indian design perspective. It includes many different floral patterns and can be extended from hands to arms.

Floral patterns can be small or larger depending on your hand size and other patterns you are drawing. It is best for wedding occasions and you can use both light and dark brown ink colors. 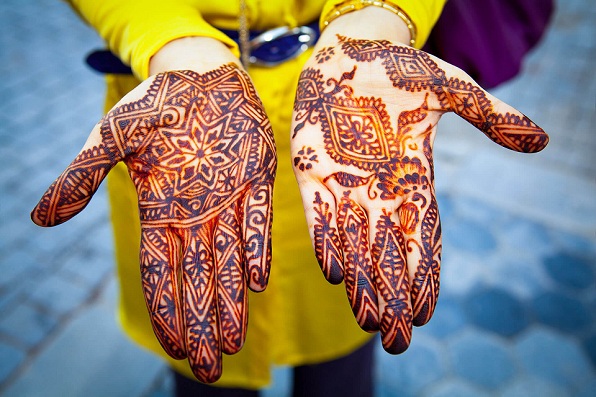 These types of mehndi designs do not have any specific purpose or design limit you can opt them for any special gathering and can wear any formal traditional dress with it. These types of designs should be done using dark tone mehndi color and attract fair skin more than any other color. 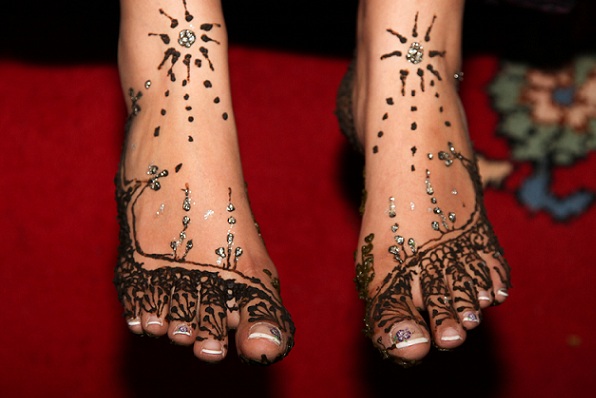 Feet mehndi art are more often worn by brides and many mehndi artists use rhinestones and other glittering materials to make this mehndi design more attractive and eye catchy. These mehndi designs are suitable under lehnga and other wedding traditional dress forms. 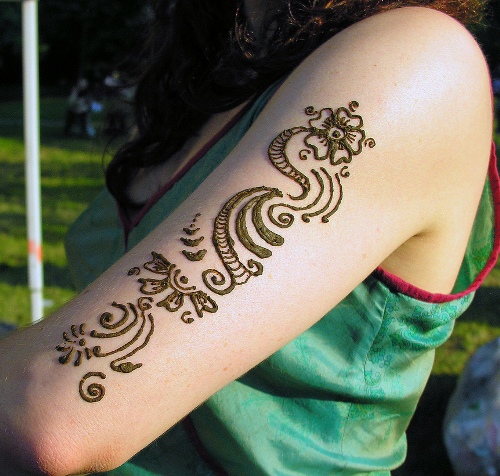 It should only be used during the summer time because you will be in half sleeves and can be used as a daily routine style statement. Patterns of different types including simple and some artwork can be used but we would suggest having simple artwork on arms.

It can be used as a casual mehndi art and can be even worn with your casual outfits. 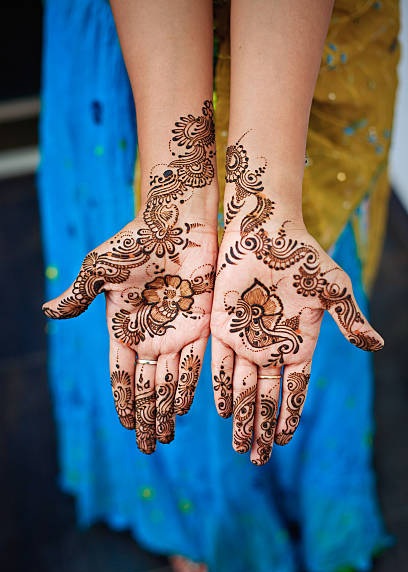 You will see more floral patterns than any other design because these are more attractive and makes looks eye catchy. We have already shown a floral pattern above this one is simpler and can be worn during the wedding parties. 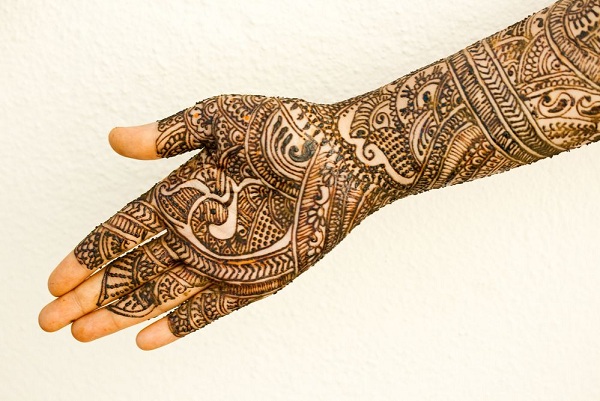 If you are looking for something that can be drawn from your hand to your arms then this one is for you. Peacock patterns are mixed with geometric artwork and are extended towards arms. These designs are for the summer season where most woman wear half sleeves and you can show your mehndi design wherever you go. 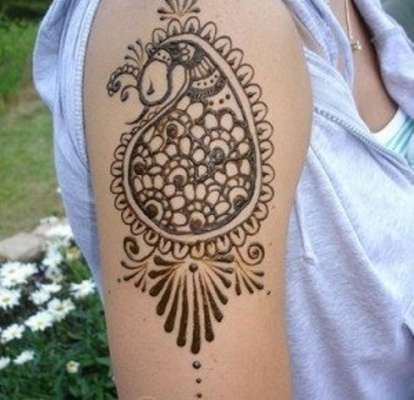 Peacocks are one of the most widely used mehndi design artwork sometimes these are used with other patterns and sometimes solo. This arm mehndi artwork is a solo peacock design which you can have in for your casual routine. 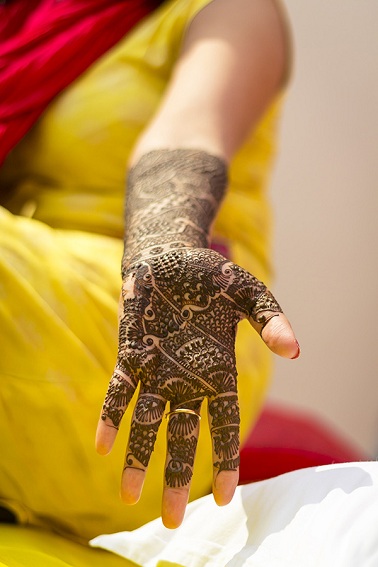 Mehndi is an event for subcontinent brides which happens just before the Baraat event and yellow is the most worn as a dress color on it. You can have the hand to arm mehndi artwork for the summer seasons and choose mehndi color according to your skin tone. 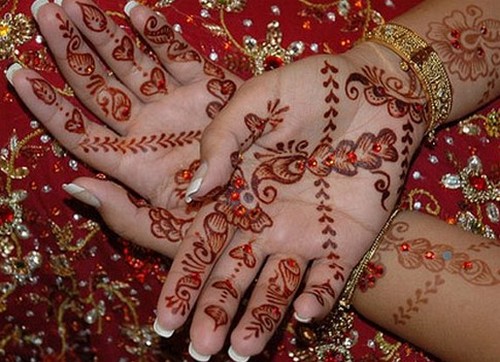 Just like the above shown Mehndi event artwork, this one is specifically for the Baraat event it has a red color which will match with your bridal dress. You can use some shiny rhinestones of red color to complement the complete design. 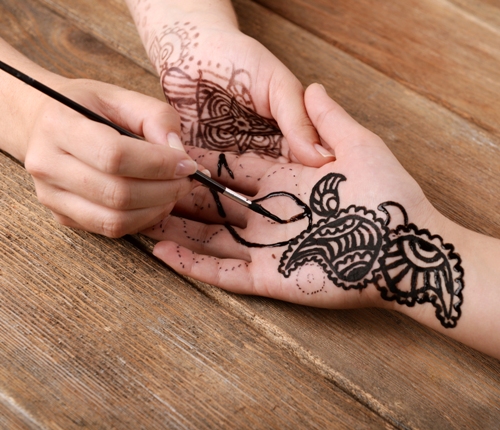 Black mehndi tattoo is a unique design which you normally doesn’t see everywhere this is more specifically a tattoo design than a mehndi design. Because it’s been drawn using black ink and mehndi is drawn using henna. Same types of patterns can be drawn and you can wear your favorite black dress with these patterns. 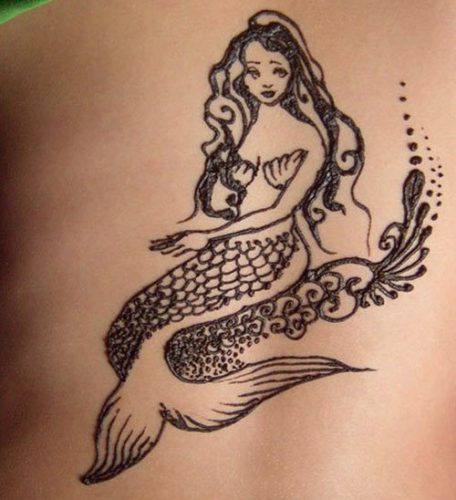 It’s more typical tattoo then a mehndi design and can be drawn with both ink or henna. You can have this design on arm or shoulder. Be sure to have it where everyone can see it like arms or back shoulder when wearing a backless dress. 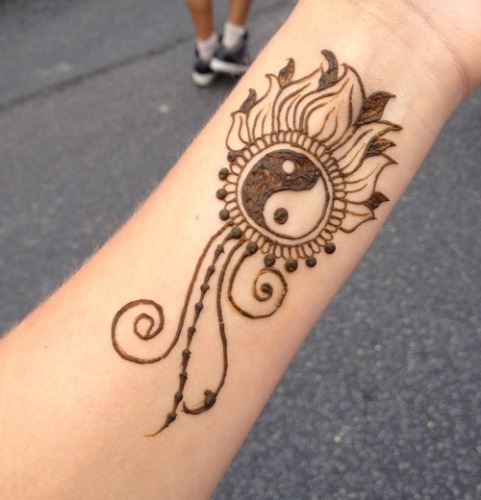 Wrist mehndi designs are usually for young girls and can be worn any time above tattoo design is just an example you can use any of your favorite designs on the wrist. 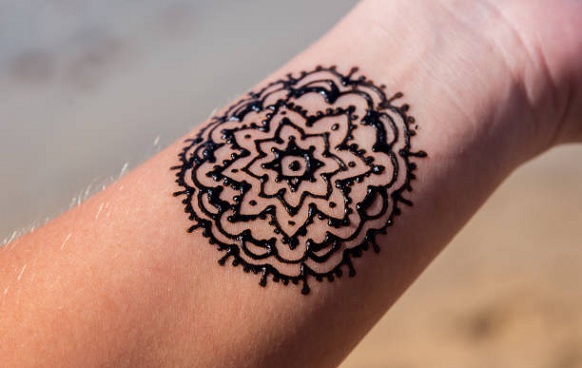 Just like the above wrist tattoo, it’s a simple floral pattern can be worn in your casual routine while going to school or college. You don’t need anything extra just a simple tattoo is enough to show your artwork and love for mehndi tattoos. 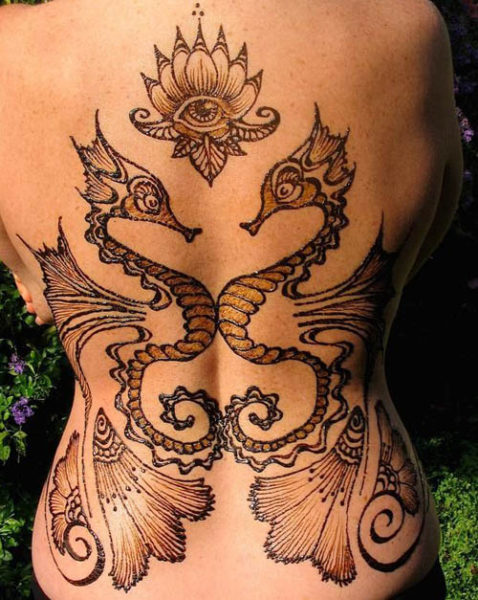 Back body Mehndi tattoo is more of a typical back body tattoo because usually mehndi designs are not drawn on the back body. But since we are discussing mehndi tattoos here you can use body back as your artistic playground and ask for a special and unique pattern which can be in combination with mehndi floral and geometric patterns. You should wear a backless shirt to show your style to everyone. 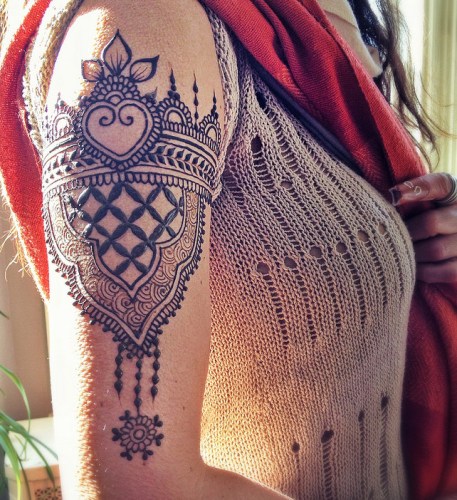 Arabic mehndi patterns are more famous and common among the South Asian woman this arm mehndi design is for the summer season and can be worn as a bride or wedding guest. 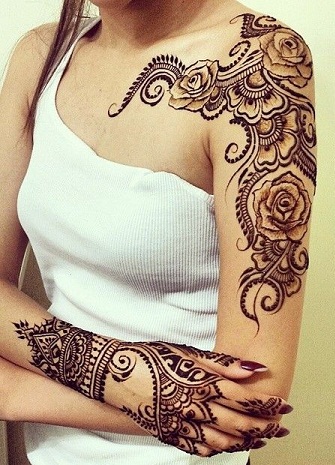 If you are looking for tattoo and mehndi combination then this one is the best example it has a rose flower on the arms and geometric patterns on hands. It can be worn anywhere from weddings to the usual daily routine and can be worn with western or traditional eastern clothes. 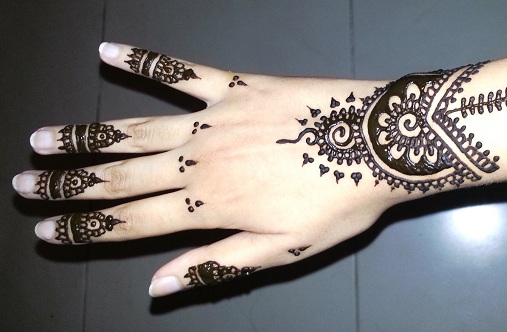 Mehndi artwork has thousands of patterns and this one is one of the easiest and simple design you can have for any special event. If you have a fair color skin then use darker mehndi colors otherwise brown will be suitable. 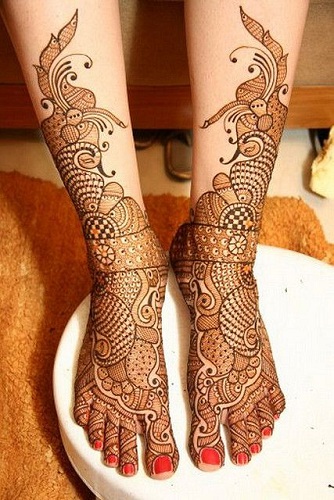 We have already shared feet to legs mehndi design this one is another example of bridal mehndi design you can have for your special day. Feet are completely covered with Mehndi artwork and are extended toward knees. 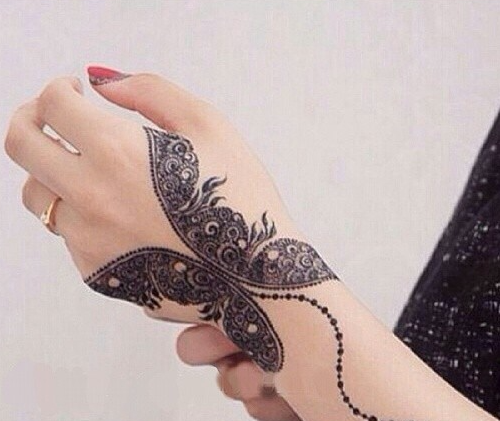 A butterfly is a unique mehndi art not everyone has tried it. If you are one of those persons looking for some unique mehndi patterns try this butterfly mehndi tattoo on your hand. This design is for young girls and mehndi artist can use other patterns also to complete this artwork. 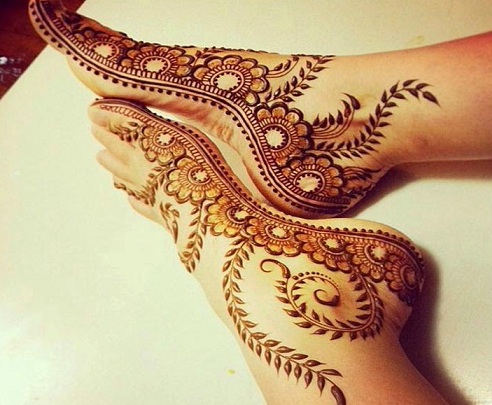 Foot mehndi designs are for those brides who like their feet and wanted to showcase more style with their feet. You can find two other different types of feet tattoos above but those were from the front side of the foot this one is from the sides. It’s a beautiful pattern and will look best with any of your traditional lehnga or wedding dresses.

We hope you will like these 20 Mehndi Tattoo Designs we tried to cover both tattoos and mehndi artwork and a combination of both. Most of these mehndi artwork is drawn by henna paste but nowadays inks are also available depending on your choice whether you need a mehndi design or a tattoo.

This site uses Akismet to reduce spam. Learn how your comment data is processed.

Warm Scarf Designs For Women To Wear In Cold Days

Warm scarf designs are shown with winter casual outfits street style these are bigger scarf that is rolled around your neck to full front body...
Kids

Baby Frock Designs shown here are made of cotton very light weight your baby girl will feel comfortable in these frocks check out the...
DIY style

Bronze Makeup Tutorials & ideas are available in so many forms on the internet we have selected best for you read and follow the...
Shalwar Kameez

Gul Ahmed Unstitched Summer Lawn Collection is the latest prints launched by the top brand of Pakistan we have got pictures of the dresses...
Women

5 Things To Consider While Buying a Fur Coat

It's a great opportunity to purchase your first genuine fur coat. You realize that it will separate you from the group but on the...

-Stylevilas.com- A Lifestyle Magazine for your daily style dose fresh content is updated on Hairstyles, Outfits, Styling, Jewelry for both men and woman.